OUT & ABOUT -
"Everybody needs beauty as well as bread, places to play in and pray in, where nature may heal and give strength to body and soul alike." John Muir

As an artist, Dix Baines finds that by getting ﻿OUT & ABOUT and into nature, as John Muir spoke about, both "body and soul" are healed. Inspiration for new paintings flows, as he sees the beauty, participates in the environment, and in general, breaths it all in. These paintings find their way into galleries, into shows, commissions, and occasionally a miniature painting, that will be auctioned on the STUDIO AUCTION PAGE.
​

Dix Baines  OUT & ABOUT painting at Cape Royal, just past "Angel's Window," at the North Rim of the Grand Canyon
​August 2017
OUT & ABOUT - COLORADO
"There is a love of wild Nature in everybody, an ancient mother-love ever showing itself whether recognized or no, and however covered by cares and duties." John Muir “ 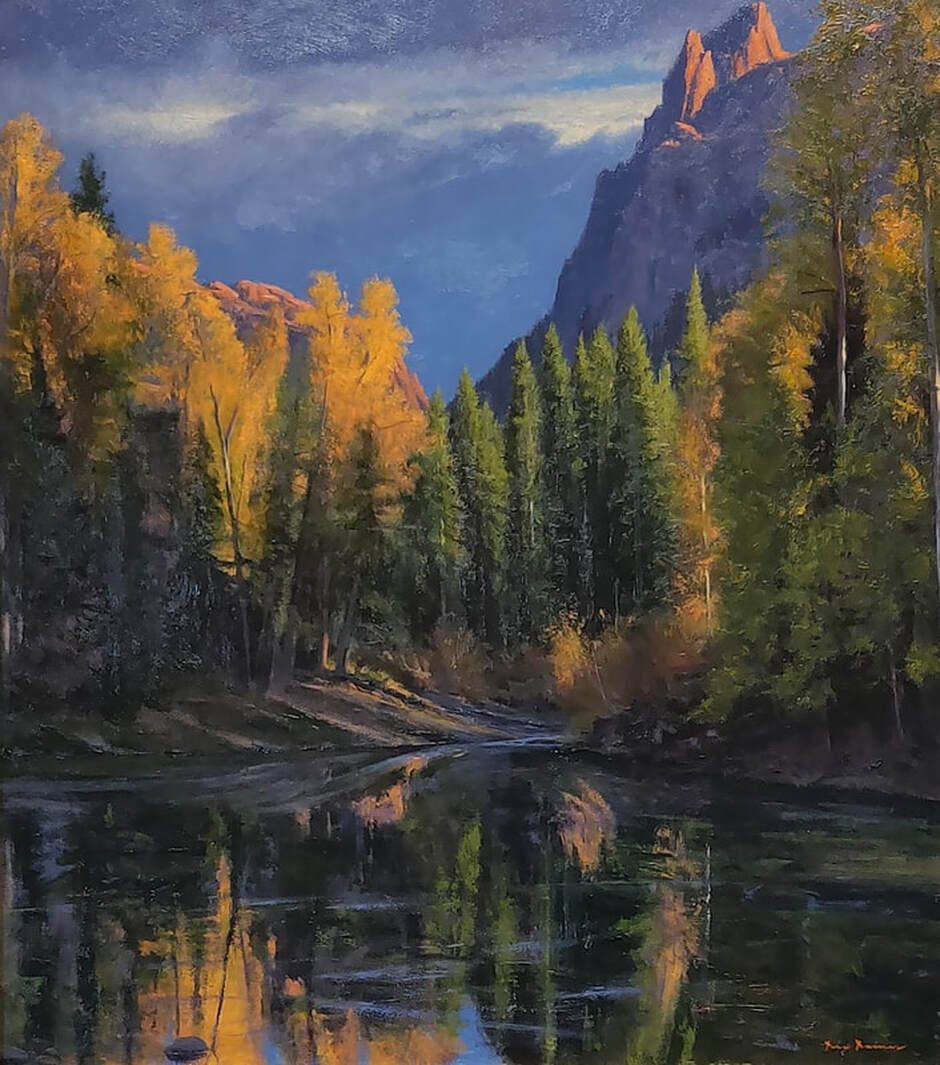 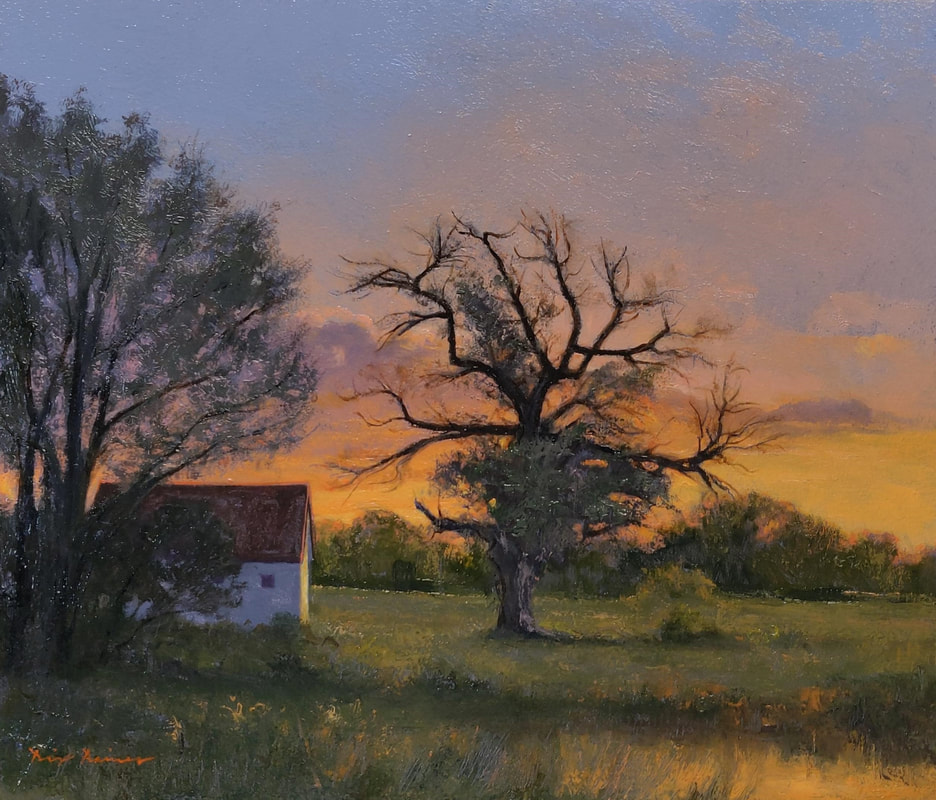 ​"Summer Sunset"  10x12  oil on panel SOLD
Available through Loyalhanna Watershed 35th Art Auction Benefit @ 724.238.7560
OUT & ABOUT - COLORADO
"There is not a fragment in all nature, for every relative fragment of one thing is a full harmonious unit in itself." John Muir “ 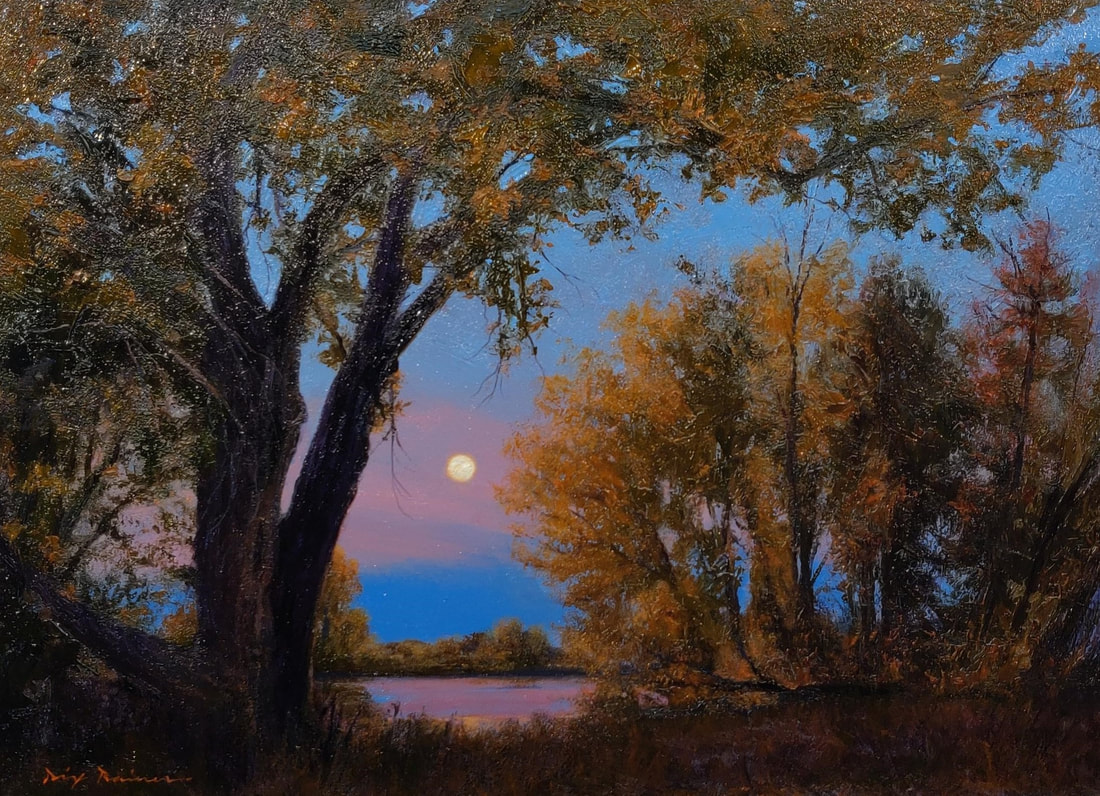 ​"Morning Moon"  10.5x14  oil on panel SOLD
Available through Loyalhanna Watershed 35th Art Auction Benefit @ 724.238.7560
OUT & ABOUT - COLORADO
"The morning stars still sing together, and the world, not yet half made, becomes more beautiful every day ." John Muir “ 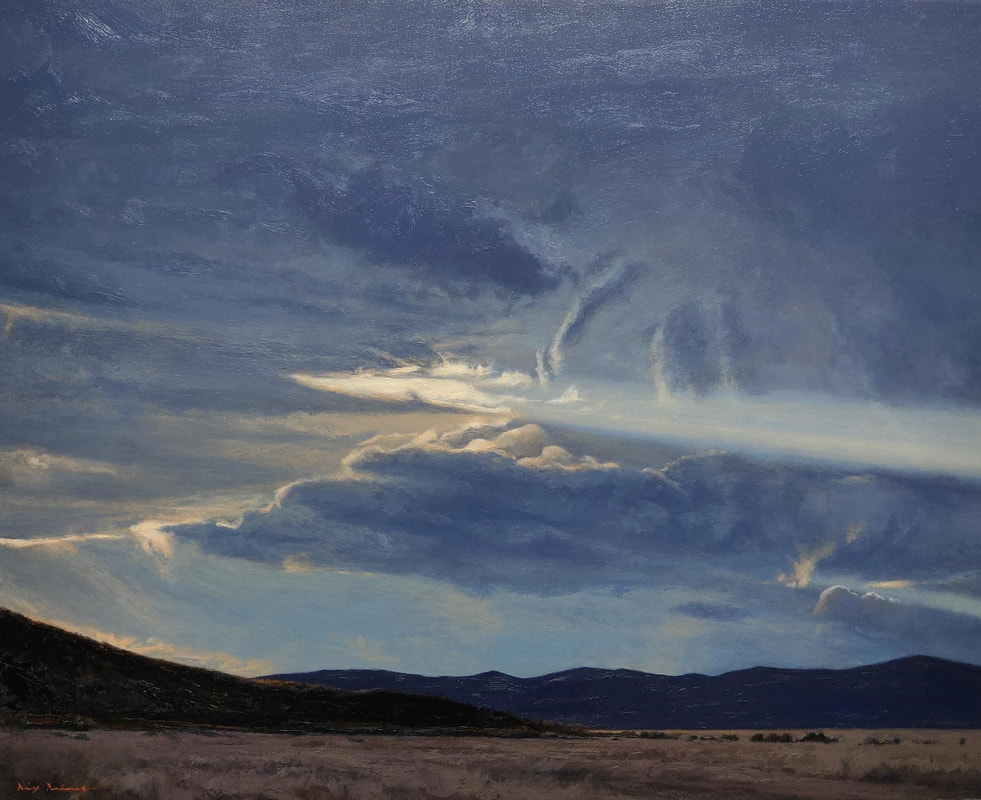 ​"Silver Light"  24x30  oil on panel SOLD
Available through McLarry Fine Art Gallery @ 505.988.1161
OUT & ABOUT - UTAH
"Nature is every at work building and pulling down, creating and destroying, keeping everything whirling and flowing, allowing no rest, but in rhythmical motion, chasing everything in endless song out of one beautiful form into another." John Muir “ 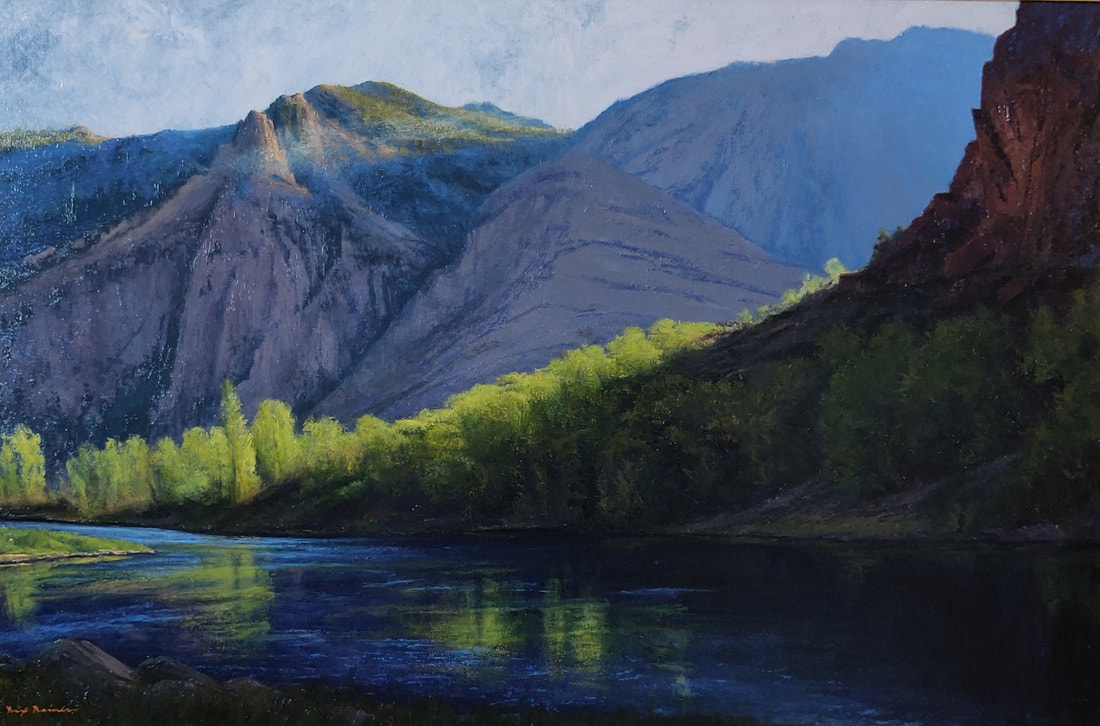 ​"After a Black Canyon Rain"  24x36  oil on panel $7700
Available through McLarry Fine Art Gallery @ 505.988.1161
OUT & ABOUT - NEW MEXICO
"The rivers flow not past, but through us, thrilling, tingling, vibrating every fiber and cell of the substance of bodies, making them glide and sing." John Muir 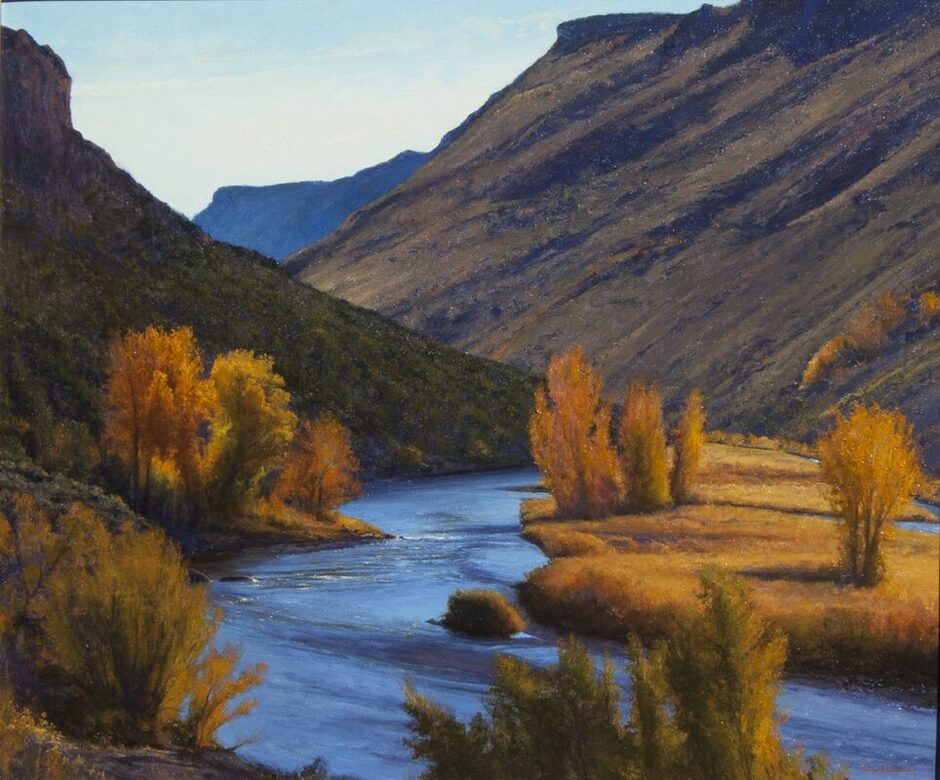 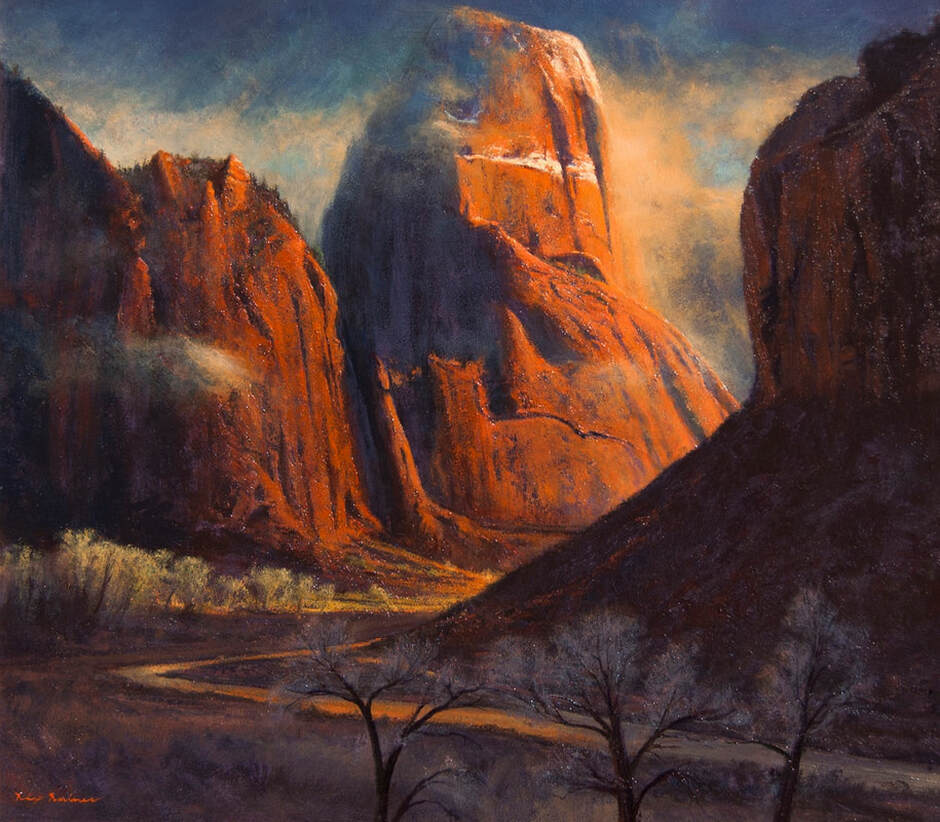 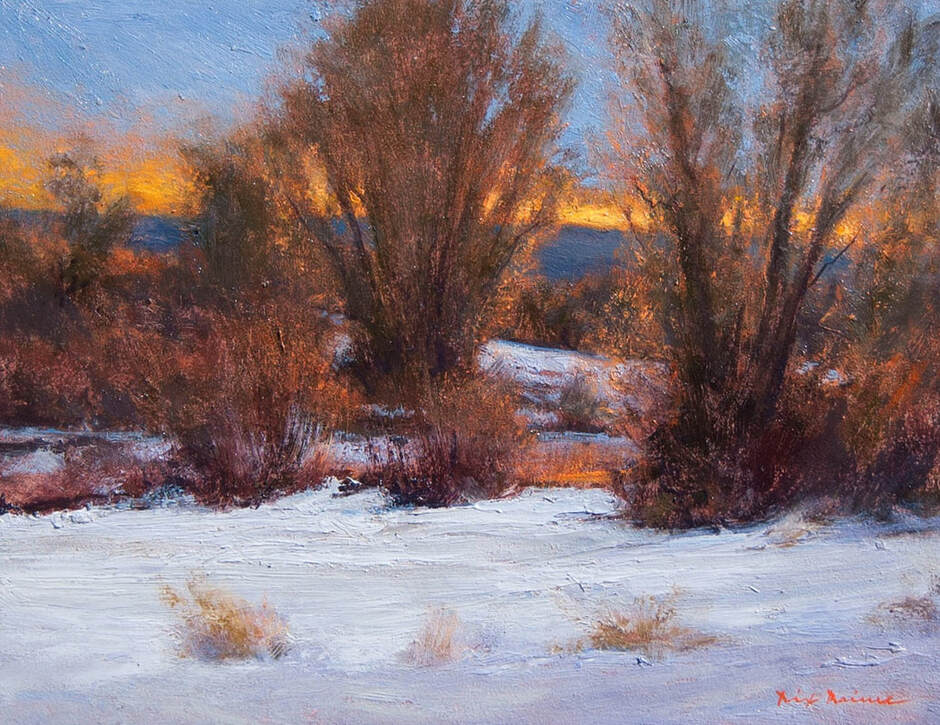 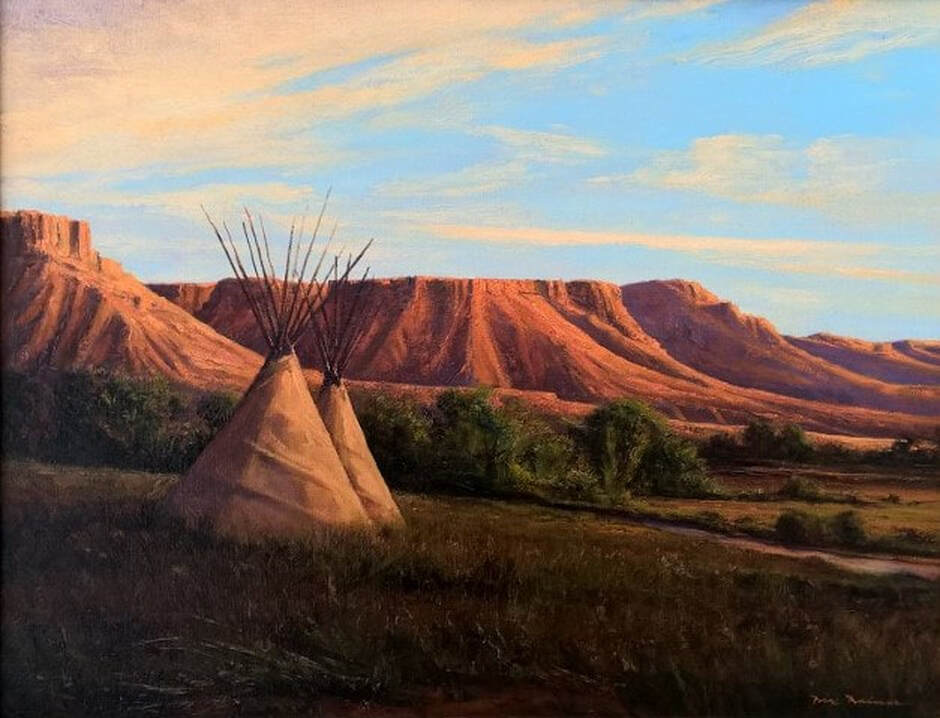 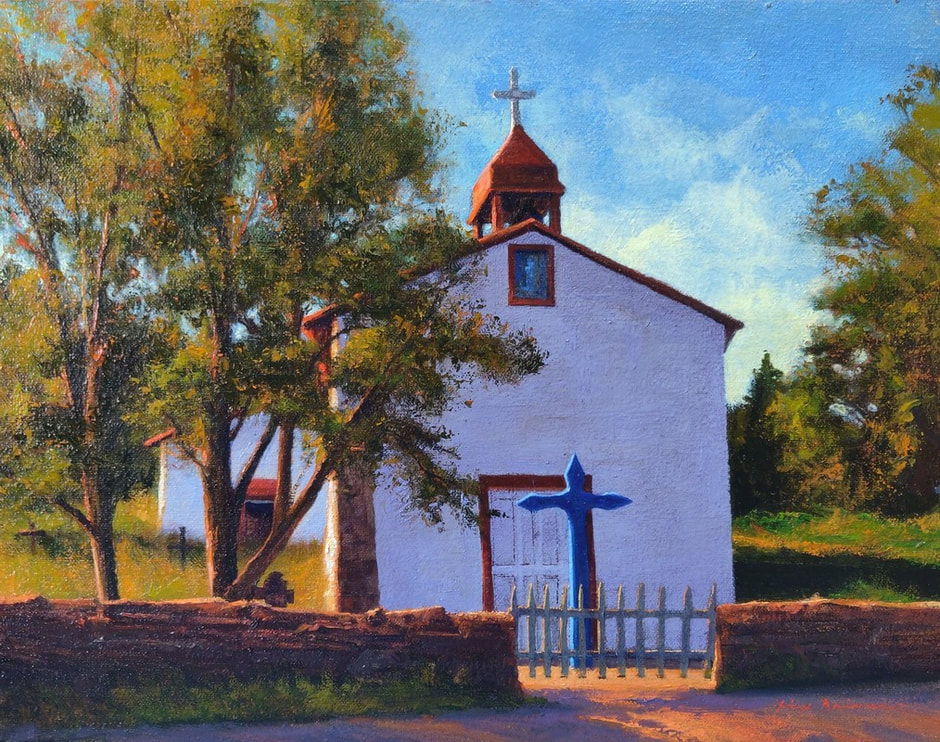 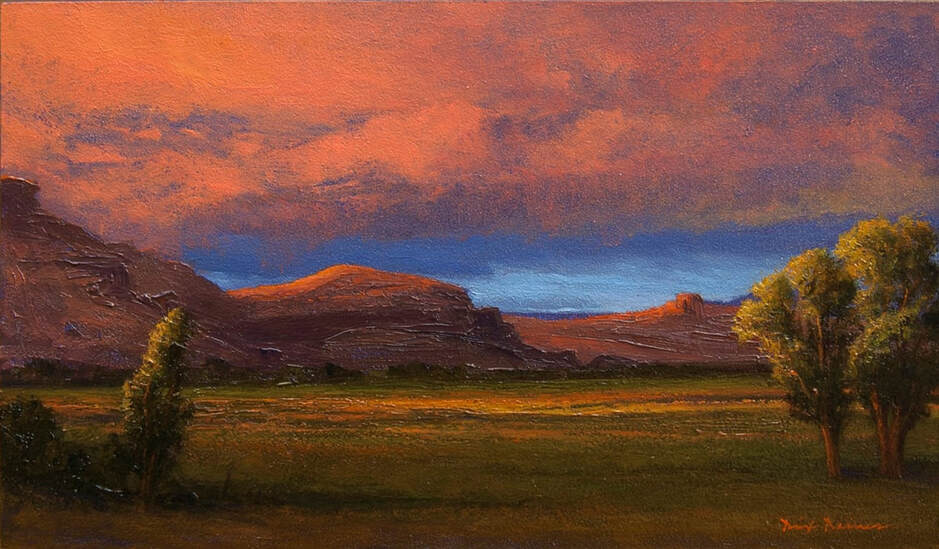 "Sangre Sky"  7x11.5  oil on panel $1200
Available through McLarry Fine Art Gallery @ 505.988.1161
OUT & ABOUT - NEW MEXICO
​​​​'"No synonym for God is so perfect as Beauty. Whether as seen carving the lines of the mountains with glaciers, or gathering matter into stars, or planning the movements of water, or gardening-still all is Beauty!" John Muir 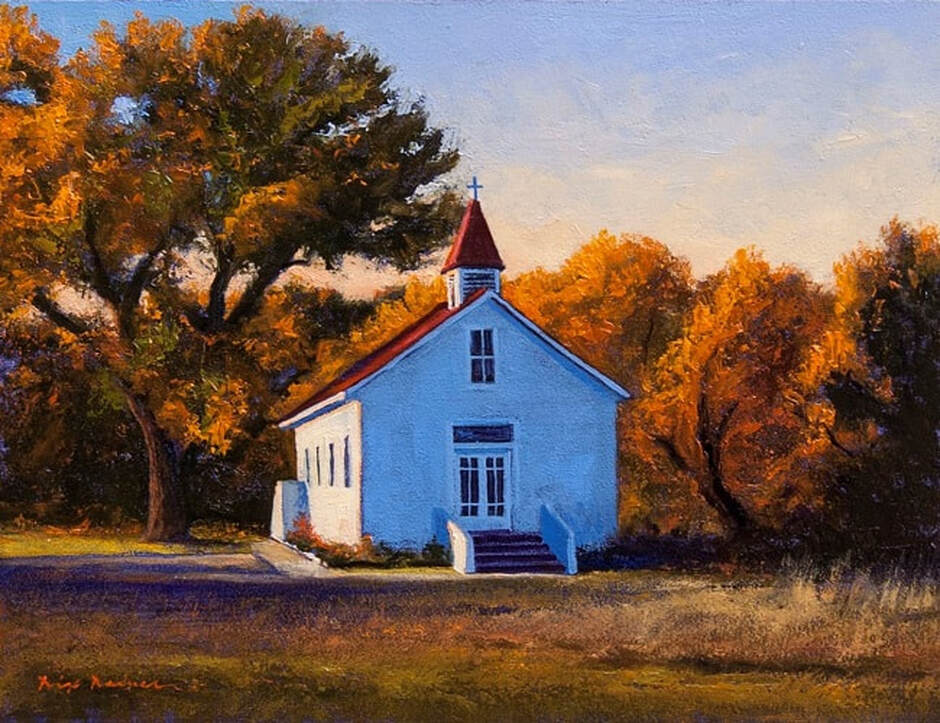 "Turning Leaves"  9x11  oil on panel  SOLD
​
OUT & ABOUT - UTAH
​​​​'"Thousands of tired, nerve-shaken, over-civilized people are beginning to find out that going to the mountains is going home; that wilderness is a necessity; and that mountain parks and reservations are useful not only as fountains of timber and irrigating rivers, but as fountains of life." John Muir

OUT & ABOUT - PENNSYLVANIA
​​​​'"The forests too, seem kindly familiar, and the lakes and meadows and glad singing streams. I should like to dwell with them forever." John Muir 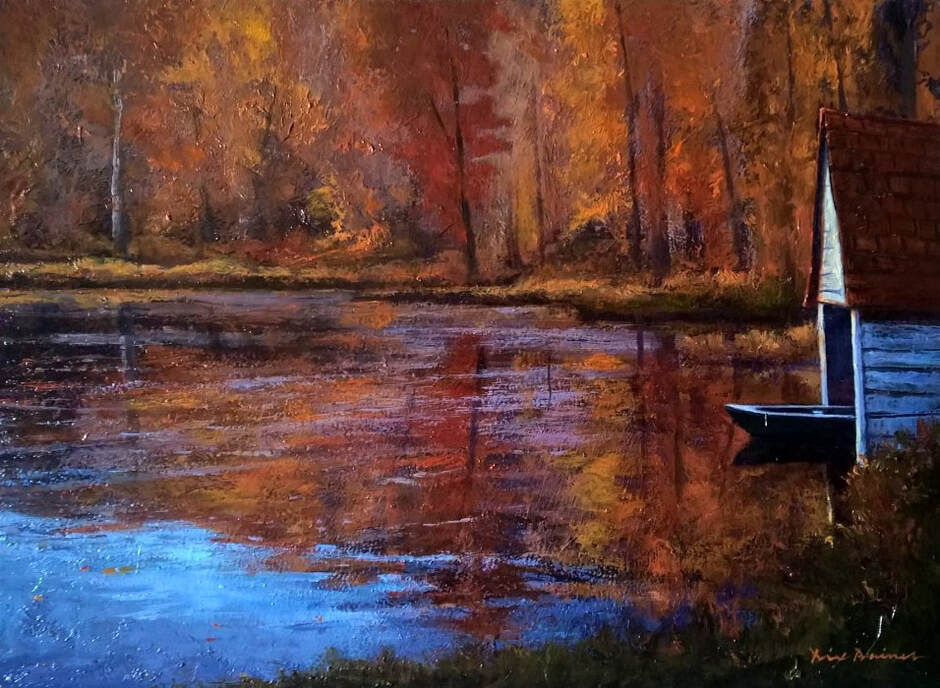 OUT & ABOUT - COLORADO
​​​​'"Every feature glowed with intention, reflecting the plans of God." John Muir 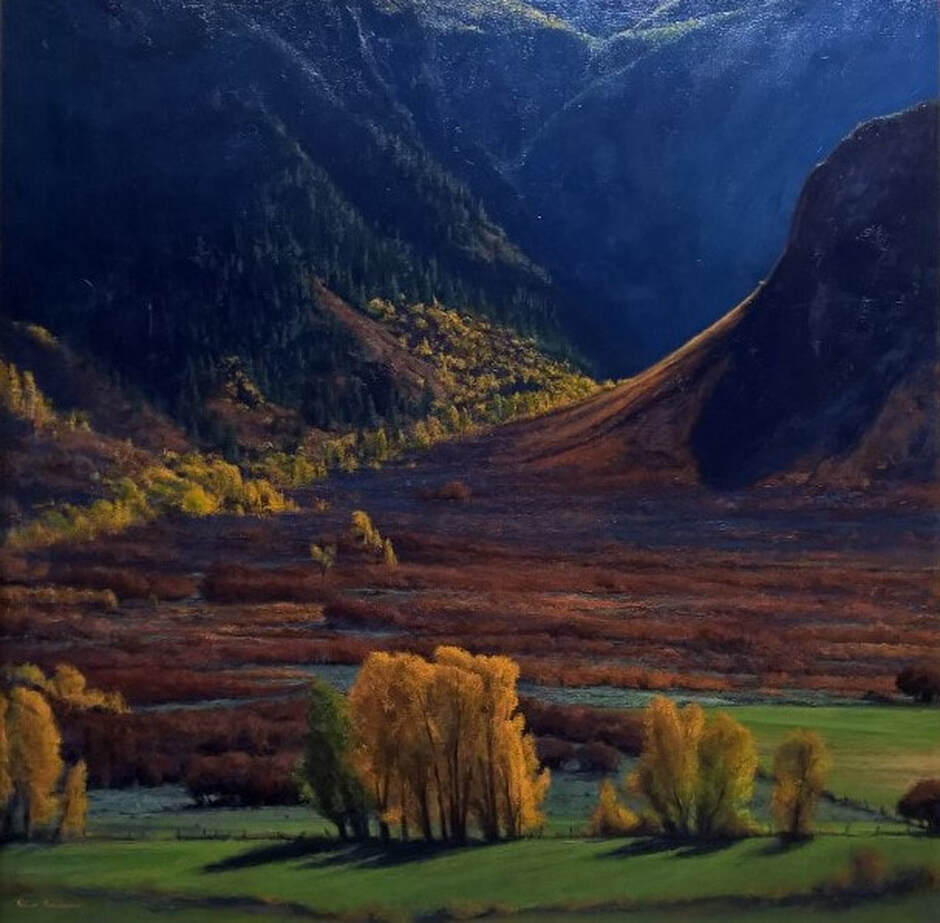 "Autumn Tapestry"  30x30  oil on panel $8000
Available through McLarry Fine Art Gallery @ 505.988.1161
OUT & ABOUT - COLORADO
​​​​'"I have discovered that I also live in 'Creation's Dawn.' The morning stars still sing together and the world, not yet half made, becomes more beautiful every day." John Muir 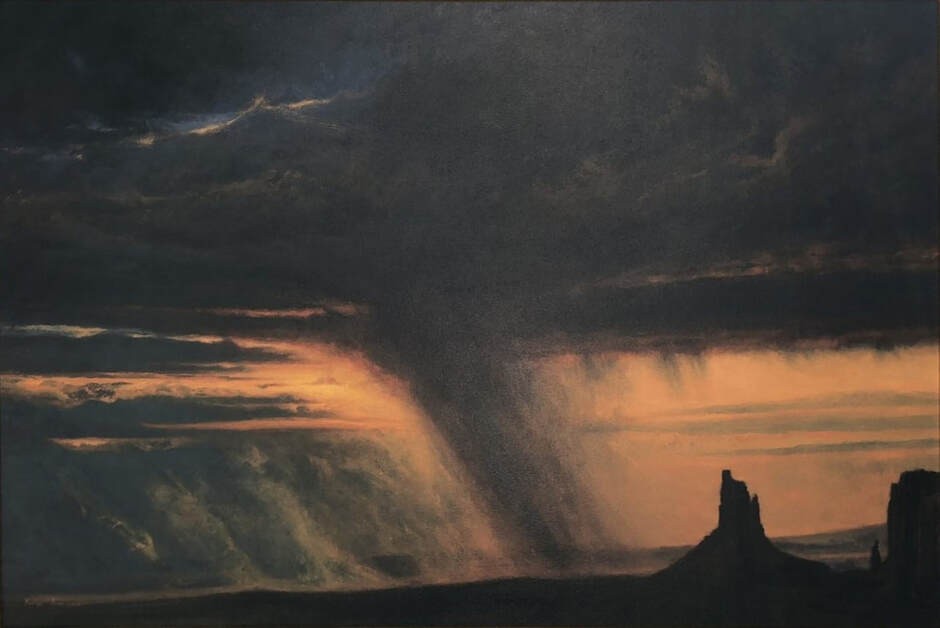 "Sunset Desert Storm"  24x36  oil on panel $7700
Available through McLarry Fine Art Gallery @ 505.988.1161
OUT & ABOUT - COLORADO
​​​​'"Nature is ever at work building and pulling down, creating and destroying, keeping everything whirling and flowing, allowing no rest, but in rhythmical motion, chasing everything in endless song out of one beautiful form into another." John Muir 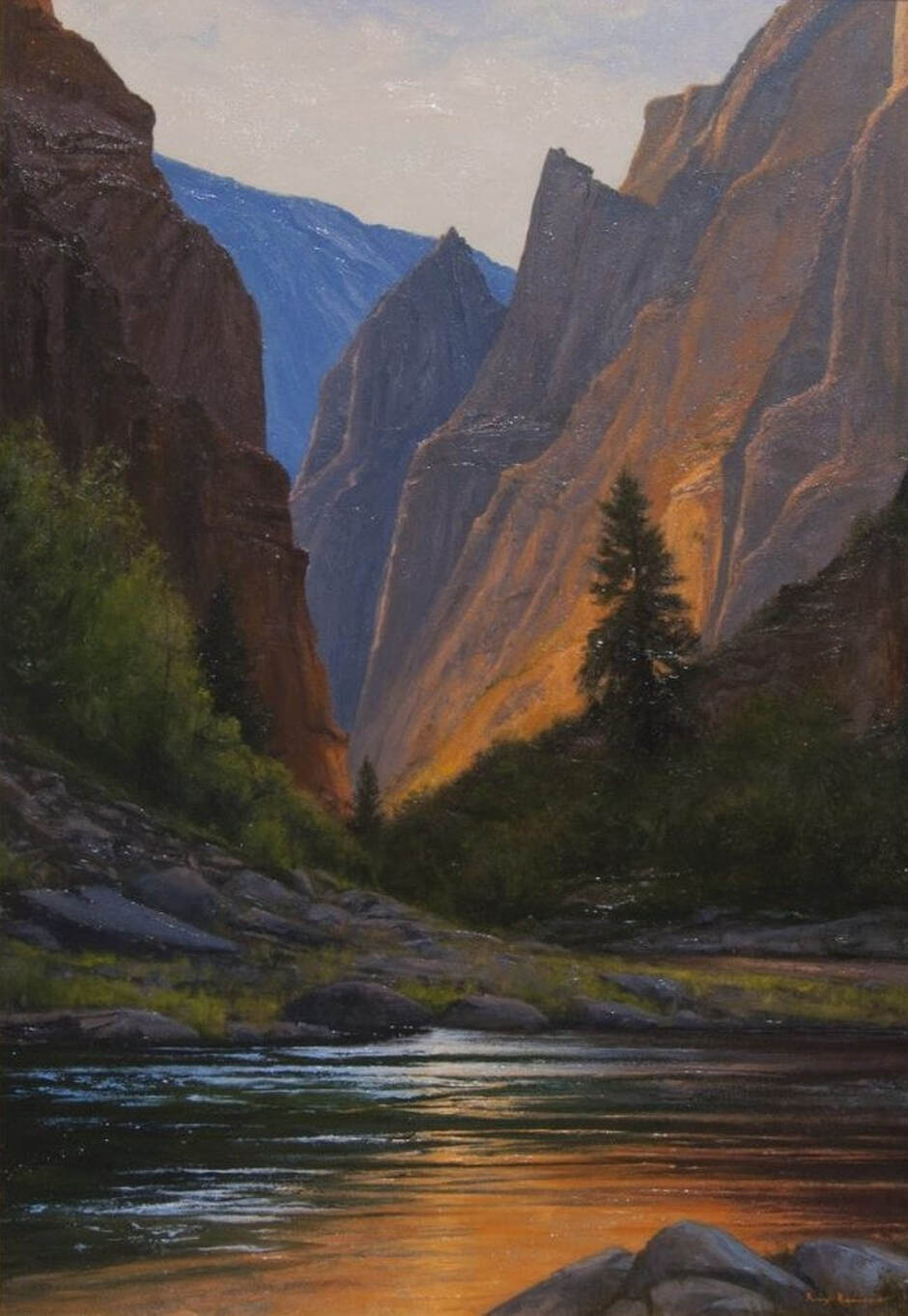 OUT & ABOUT - COLORADO
​​​​'"New beauty meets us at every step, in all our wanderings." John Muir 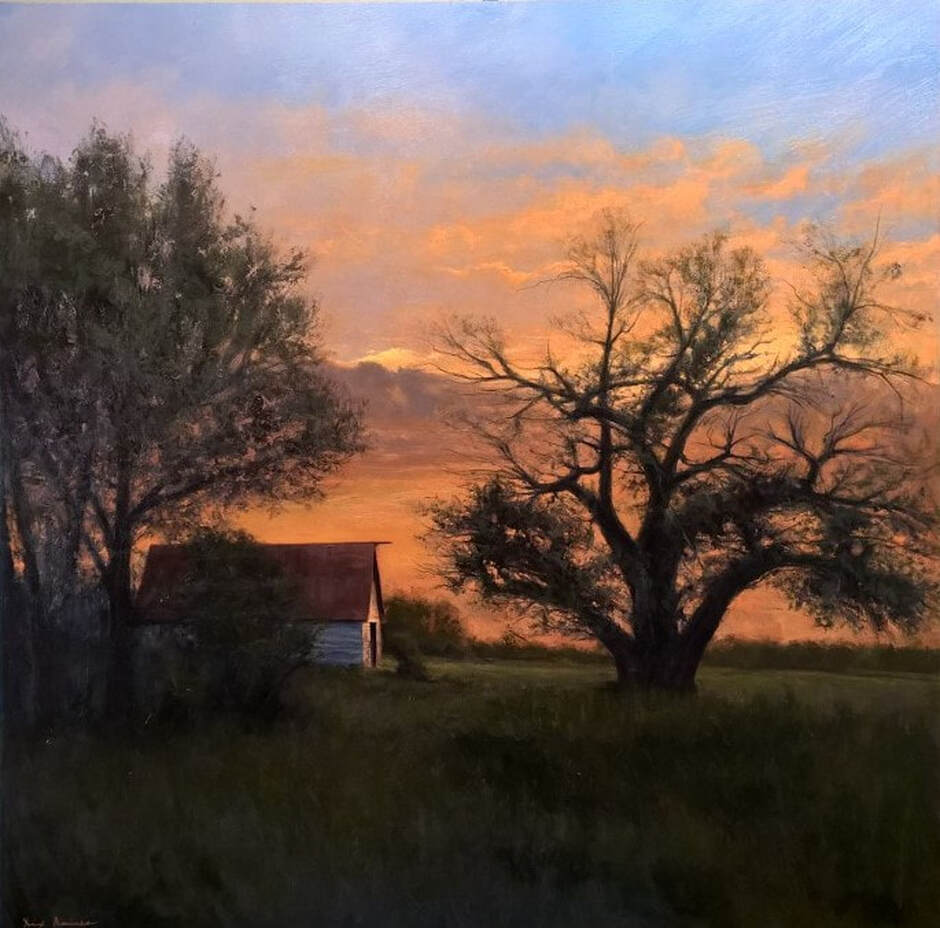 OUT & ABOUT - COLORADO
​​​​'"The glories and the beauties of form, color, and sound unite in the...canyon - forms unrivaled even by the mountains, colors that vie with sunsets, and sounds that span the diapason from tempest to tinkling raindrop, from cataract to bubbling fountain." John Wesley Powell

"I painted this piece in honor of my Studio pup and friend of 13 years, Evie, who suddenly passed on Saint Patrick's Day this year. She was a faithful friend, who saw us through some difficult times of loss of parents, and was a steadfast fixture in the Studio, as well as in our lives. She went on many a painting trip with me, including trips to the beautiful Glenwood Canyon in Colorado, where the inspiration for this painting came." Dix Baines 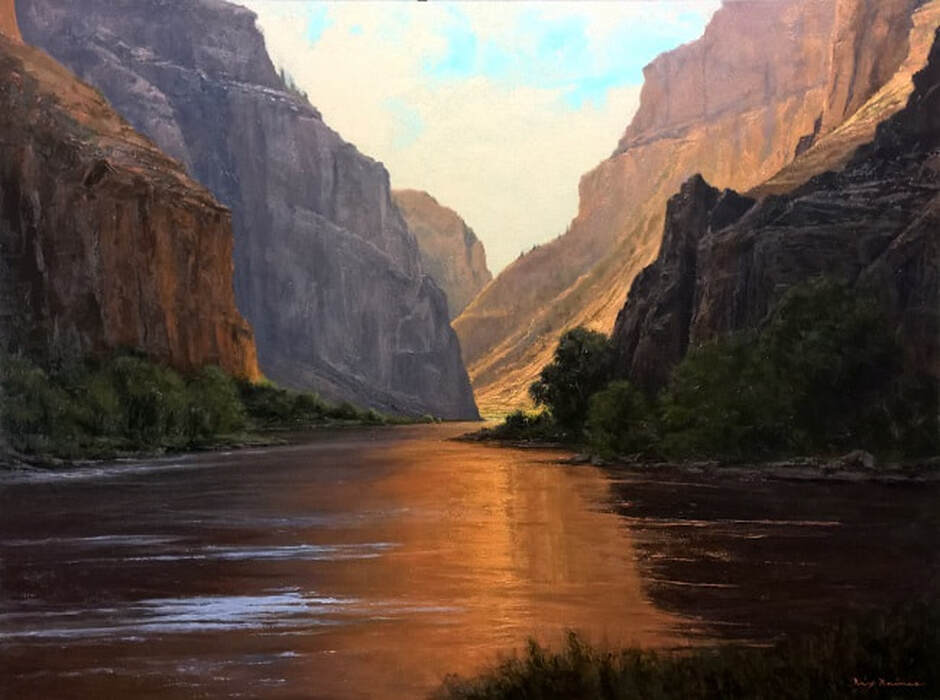 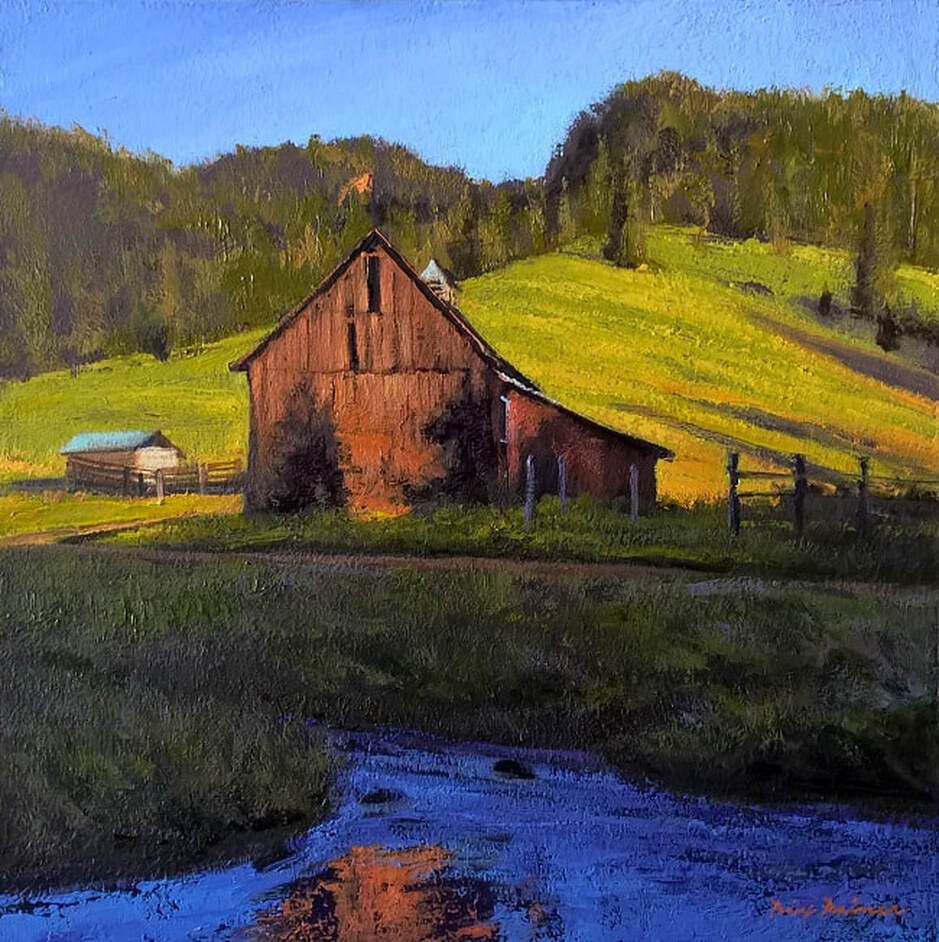 "Barnwood Light" 9 x9  oil on panel SOLD
OUT & ABOUT - COLORADO
​​​​'"Climb the mountains and get their good tidings. Nature's peace will flow into you as sunshine flows into trees. The winds will blow their own freshness into you, and the storms their energy, while cares will drop off like autumn leaves." John Muir 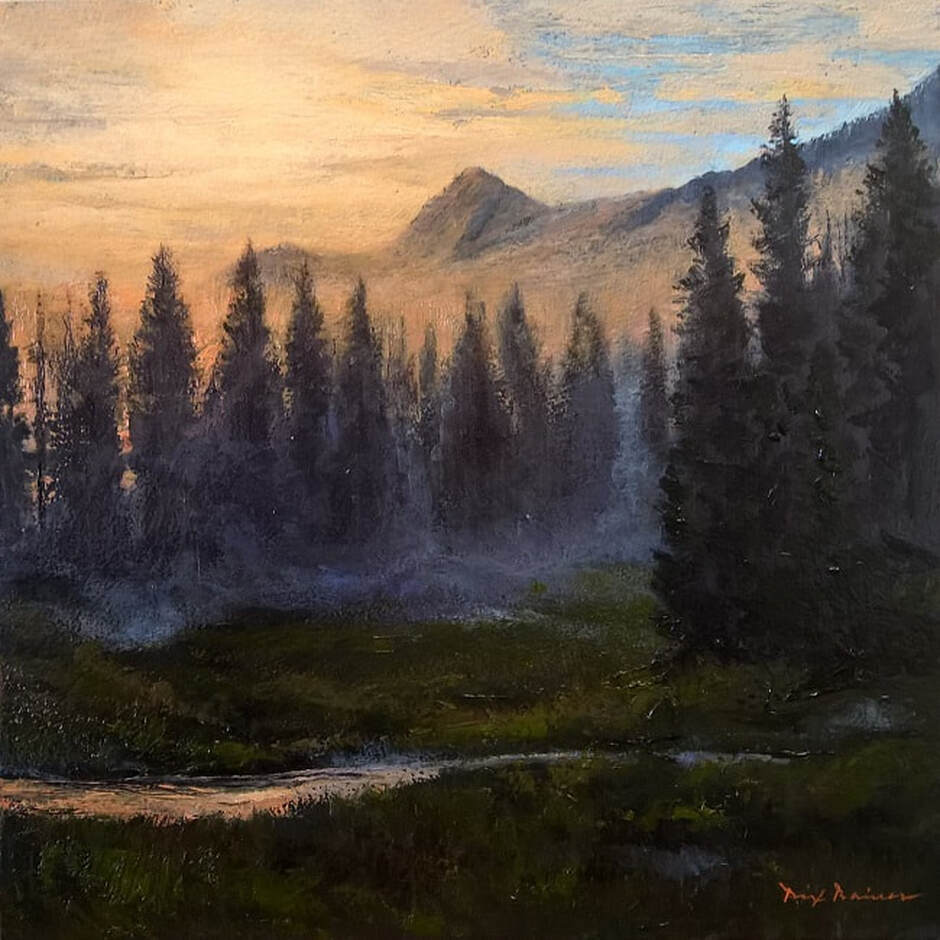 "Mountain Mist" 9 x9  oil on panel SOLD
​
OUT & ABOUT - COLORADO
​​​​'We live in a grand and magical place in Colorado, and many of my paintings celebrate this. The truth to which I am striving to capture is best said in these words by George Inness; 'The true end of Art is not to imitate a fixed material condition, but to represent a living motion...the intelligence to be conveyed by it is not an outer fact, but an inner life.' -Dix Baines 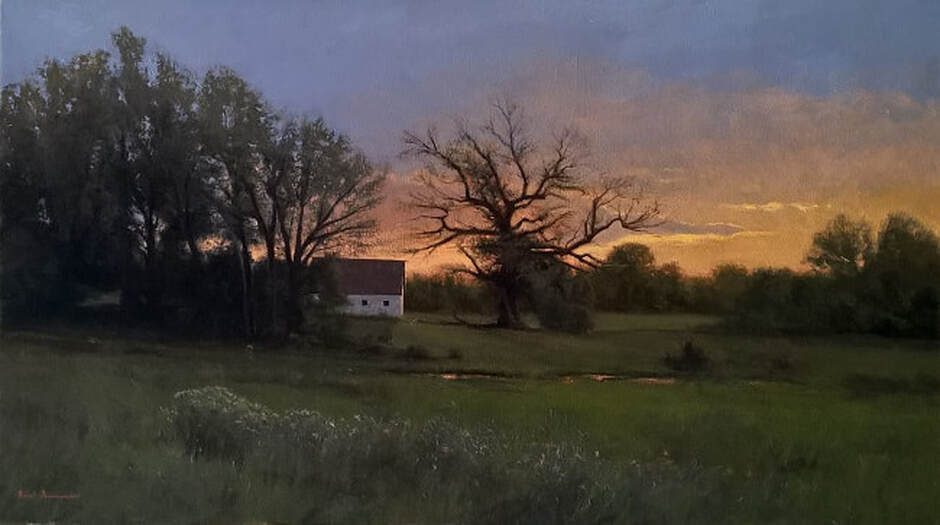 "Evening Fire" 24 x 42  oil on panel SOLD
OUT & ABOUT - UTAH CANYONLANDS NATIONAL PARK
​​​​"Whatever is fitted in any sort to excite the ideas of pain of danger ... or is conversant with terrible objects .. is the source of sublime: that is, it is productive of the strongest emotion which the mind is capable of feeling." Edmund Burke

​"The lightning not seen in this view, in these moments, had me soon running to my vehicle. It was awesome to behold briefly the fury of the elements that shape the land." Dix Baines 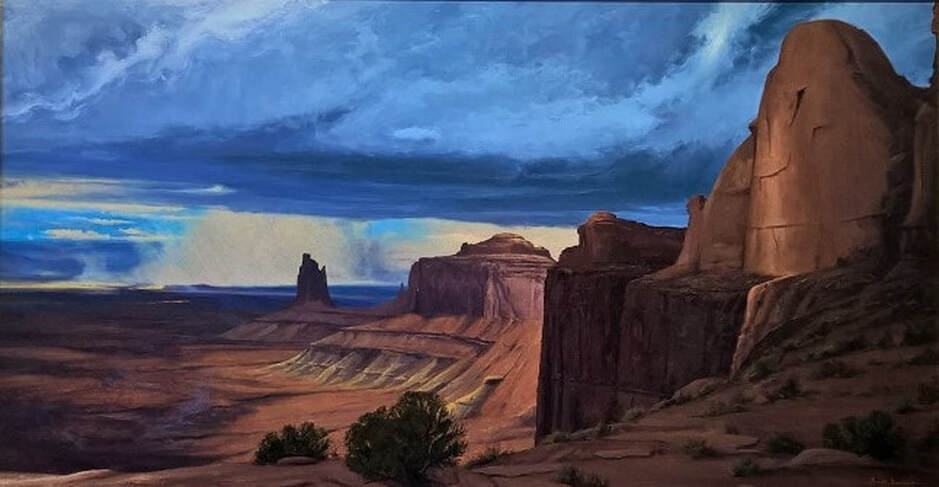 OUT & ABOUT - UTAH ARCHES NATIONAL PARK
​​​​"The grand show is eternal. It is always sunrise somewhere. The dew is never dried all at once. A shower is forever falling. Vapor is ever rising. Eternal sunrise. Eternal dawn and gloaming. On seas and continents and islands. Each in it's turn as the round earth rolls." John Muir

While OUT & ABOUT and visiting Arches National Park during September's 1435 mile adventure through Utah's parks with Dix's wife and 87 year old father-in-law, there was a torrential rain storm that closed the only road out of the Delicate Arch parking lot. It took the park service several hours to get the road open again, which meant being stuck in the parking lot until nearly 8 PM. The silver lining to the very long day was an unbelievable and spectacular sunset display, that became the subject of "Light After the Storm" (24x36) 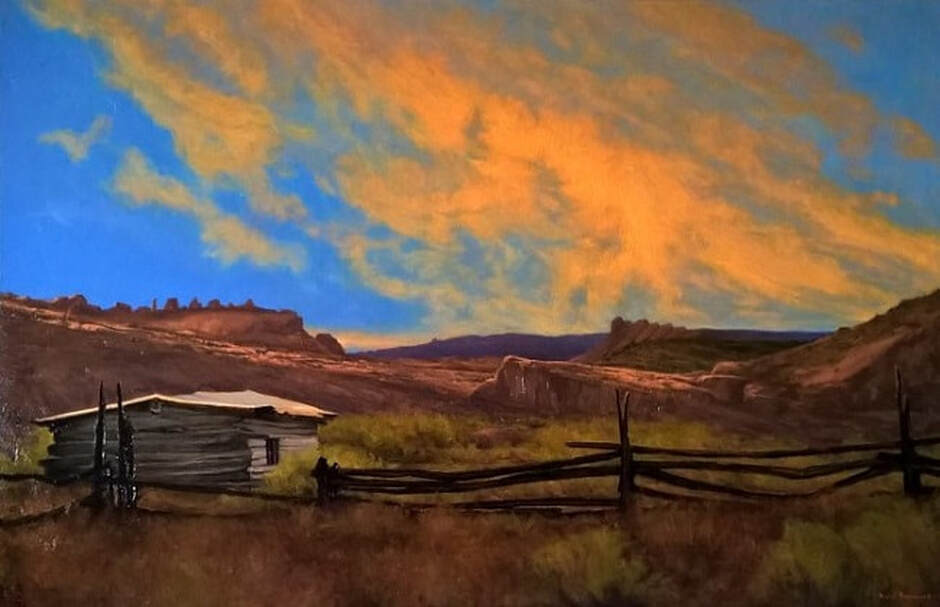 OUT & ABOUT - COLORADO ROCKY MOUNTAINS OCTOBER
"Oh, these vast, calm, measureless mountain days, days in whose light everything seems equally divine, opening a thousand windows to show us God." John Muir
Part of being OUT & ABOUT means bringing the inspiration of photos, painted sketches, and memories back to the Studio to create larger paintings. The inspiration for this painting, "Storm Light," came from being OUT & ABOUT  in the Colorado Rocky Mountains in August.

September took Dix Baines to some unexpected and spectacular land, to restore and invigorate his creativity. Utah is home to a number of National and State Parks, some of which before this trip, he had not explored. The five day, 1435 mile trip took him along the Colorado River into Moab, Utah, followed by Arches National Park, Dead Horse Point State Park, Canyonlands National Park, The Needles Overlook, National Bridges Monument, and Goblin State Park. The inspiration and 159 photos brought back to the Studio, will keep him busy for months to come. 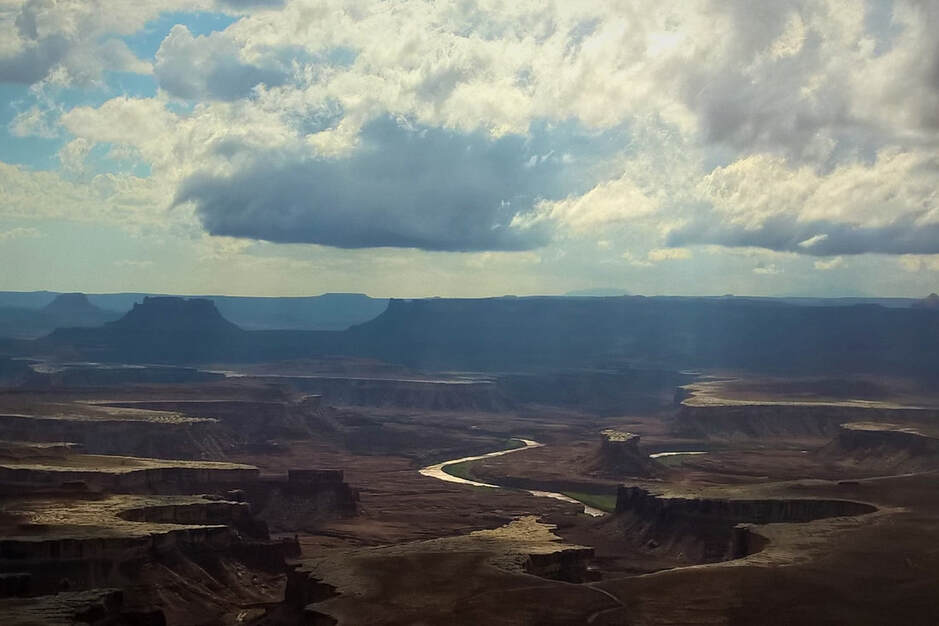 OUT & ABOUT - COLORADO ROCKY MOUNTAINS AUGUST
"Keep close to Nature's heart ... and break clear away, once in a while, and climb a mountain or spend a week in the woods. Wash your spirit clean." John Muir

As a Colorado native the Colorado Rocky Mountains are always  home.
OUT & ABOUT - North Rim of the Grand Canyon August
The North Rim of the Grand canyon, sitting at 8800 ft, is one of the crown jewels of the United States National Parks, yet it is one that is often overlooked. We recently spent our 35th wedding anniversary there and found it not a bad place to spend some "wanderlust." The sunrises were reverent, the sunsets astounding, the views abundant, possibilities endless, and at times overwhelming.

As John Muir penned:  "By going out, we are really going in." It's what our National Parks are all about. we wander "Hill and Dale" to see them. Awestruck, is the least of what we experience in them. They are images, we can equally enjoy on our walls, when captured in paint.
​ 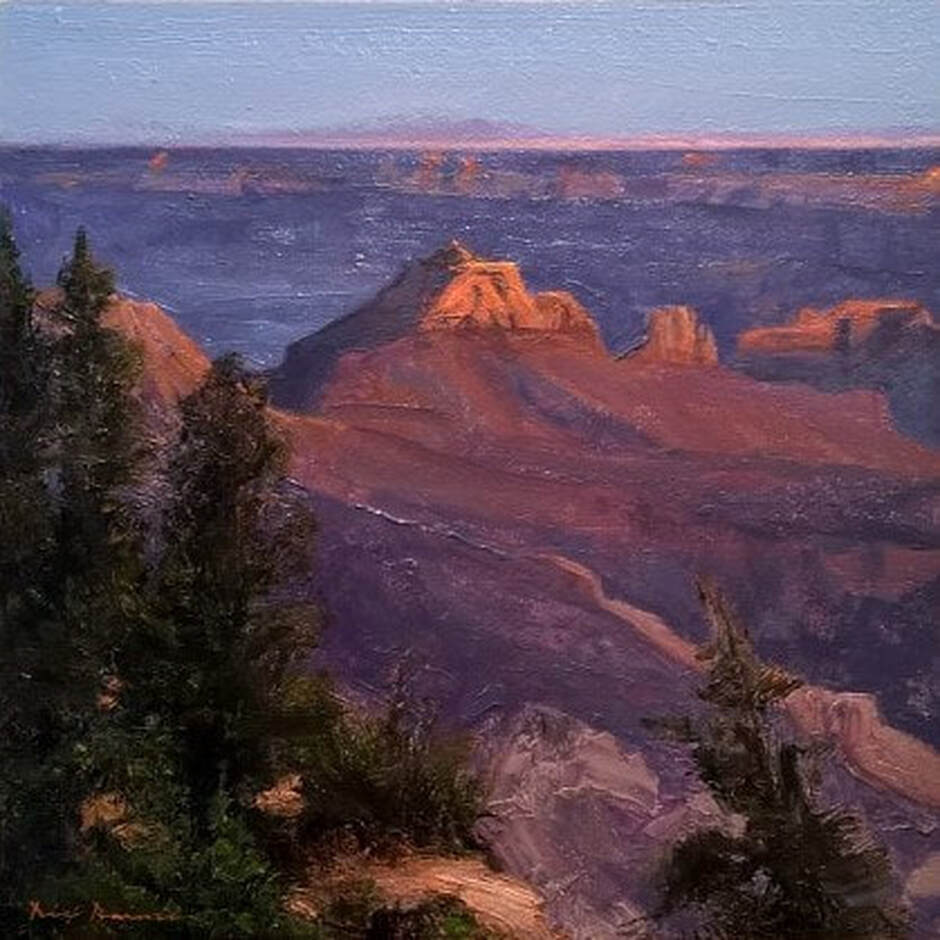 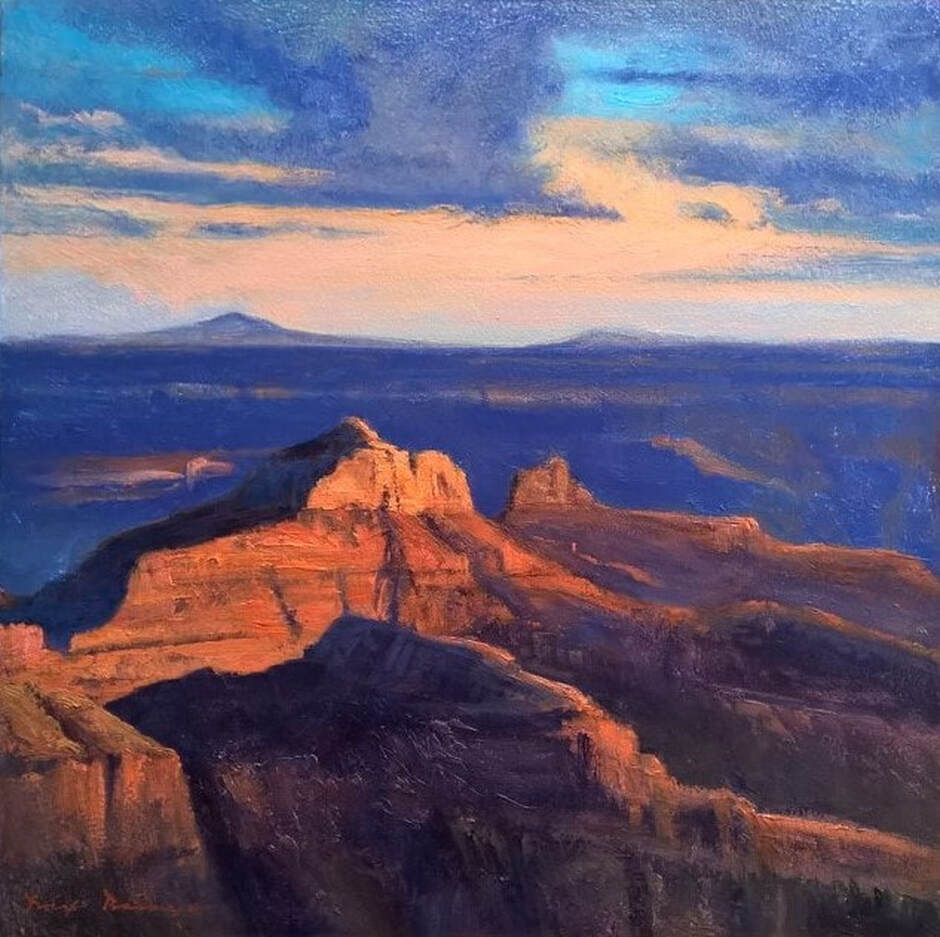